× We use cookies so we can help you better. In addition to functional cookies, which make the website work well, we place analytical cookies to make our website a little better. We also place personal cookies so that we, and third parties, can track your internet behavior and show personal content. If you choose to refuse , we only place functional and analytical cookies. More info
Show filters
Category
Price
Brand
Color
Home / Other Sports / Soccer / Bags 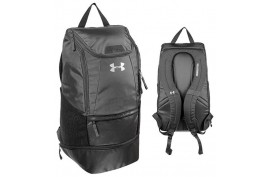 Records trace the history of soccer back more than 2,000 years ago to ancient China. Greece, Rome, and parts of Central America also claim to have started the sport; but it was England that transitioned soccer, or what the British and many other people around the world call “football,” into the game we know today. The English are credited with recording the first uniform rules for the sport, including forbidding tripping opponents and touching the ball with hands.

As the sport developed, more rules were implemented and more historical landmarks were set. For example, the penalty kick was introduced in 1891. FIFA became a member of the International Football Association Board of Great Britain in 1913. Red and yellow cards were introduced during the 1970 World Cup finals. More recent major changes include goalkeepers being banned from handling deliberate back passes in 1992 and tackles from behind becoming red-card penalties in 1998.

At the moment, there are a view top clubs per league.

Some of the top players throughout history include Pele (Edson Arantes Do Nascimento) from Brazil, who scored six goals in the 1958 World Cup and helped Brazil claim its first title; Lev Yashin from Russia, who claimed to have saved more than 150 penalty shots during his outstanding goal-tending career; and Marco Van Basten from Holland, who won several very prestigious soccer awards during one year alone. There are many debates over who the greatest soccer players are of all time; but players like Zinedine Zidane, Diego Maradona, Michel Platini, Lionel Messi, and Roberto Baggio make almost every list.

Top players at the moment:

There is a soccer backpack available on our website. This Under Armour Striker 4 Soccer Backpack is storm treated and water resistant. The backpack can also be used for other sports like American football, volleyball and basketball. The outer mesh pocket is large enough to hold a ball and there is still enough space for other stuff.