× We use cookies so we can help you better. In addition to functional cookies, which make the website work well, we place analytical cookies to make our website a little better. We also place personal cookies so that we, and third parties, can track your internet behavior and show personal content. If you choose to refuse , we only place functional and analytical cookies. More info
Show filters
Category
Price
Brand
Home / Other Sports / Golf / Performance 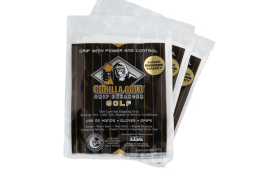 The modern game of golf originated in 15th century Scotland. The 18-hole round was created at the Old Course at St Andrews in 1764. Golf's first major, and the world's oldest tournament in existence, is The Open Championship, also known as the British Open, which was first played in 1860 at the Prestwick Golf Club in Ayrshire, Scotland. This is one of the four major championships in men's professional golf, the other three being played in the United States: The Masters, the U.S. Open, and the PGA Championship.

Golf is a club-and-ball sport in which players use various clubs to hit balls into a series of holes on a course in as few strokes as possible.

Golf, unlike most ball games, cannot and does not utilize a standardized playing area, and coping with the varied terrains encountered on different courses is a key part of the game. The game at the usual level is played on a course with an arranged progression of 18 holes, though recreational courses can be smaller, often having nine holes. Each hole on the course must contain a teeing ground to start from, and a putting green containing the actual hole or cup 4+1⁄4 inches (11 cm) in diameter. There are other standard forms of terrain in between, such as the fairway, rough (long grass), bunkers (or "sand traps"), and various hazards (water, rocks) but each hole on a course is unique in its specific layout and arrangement.

Different types of golf clubs come with various degrees of loft to get the ball into the air. They are also designed to hit the ball at varying distances and trajectories. Additionally, there are different sizes available within each type, usually indicated by the club’s number. A golf club is considered long or medium when the loft angle is low and short when it is high. Golf clubs with a lower number are designed to enable the player to make more powerful shots than high numbered ones. In this article, we will discuss the different types of golf clubs available.

Irons golf clubs are widely used in the golf arena. This is because of irons golf clubs from any hole. In fact, most players prefer Irons golf clubs when going for long shots from the tee box. As their name suggests, iron clubs clubheads are made of metal and are mostly used when the ball is fewer than 200 yards from the green.

Putters golf clubs is arguably the most important because people use them the most. They are mostly used to roll the ball beside the green near the hole. Like other golf clubs, putters come in different sizes, with the standard putter measuring between 34 and 35 inches tall. The broomstick and belly putters are quite more elevated and are mostly used to give the golfer better stoke, especially when the player has difficulties using a standard putter.

Most golfers refer to Wedges golf club as a “game-changer” because it is unique characteristics. Wedges are similar to irons golf clubs in terms of their built and looks, but their loft differs. These clubs have a higher loft degree compared to other types of golf clubs.

The diameter of the golf ball is 4.27 centimetres and the weight about 46 grams. The aerodynamics of a golf ball are very interesting: the surface of the ball is provided with many round, shallow pits (dimples) which, completely against the feeling , significantly reduce the air resistance. This makes it possible to hit the ball more than 300 meters with a golf club.

To give you more performance on the golf plate, there is grip available. The Gorilla Gold Golf grip enhancer has become the most recommended name in golf and in every sport where grip plays an important role. The Gorilla grip is safe for your hands and gloves. They are also water resistant and it has no lingering sticky feel on your grips.