× We use cookies so we can help you better. In addition to functional cookies, which make the website work well, we place analytical cookies to make our website a little better. We also place personal cookies so that we, and third parties, can track your internet behavior and show personal content. If you choose to refuse , we only place functional and analytical cookies. More info
Show filters
Category
Price
Brand
Club
Home / Fan Shop / College Football / Balls 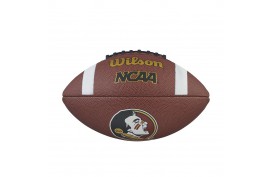 College football is one of the most popular sports in the USA. College football goes way back. It all started with a game between Rutgers University versus the College of New Jersey in 1869. There were no written college football rules at this time. Rules were introduced in 1876 in Springfield. These rules were written by a lot of representatives from colleges.

Between now and then, a lot of things changed. There were 25 players per team in the beginning and you weren’t allowed to pick up the ball. Now, 11 players per team are allowed on the field and you can not only kick the ball, but throw it as well.

Between 1939 and 1962, there were no instant replays on television. This changed in 1963. A touchdown was the first fragment that was shown over again.

In the NFL, there is a time-out 2 minutes before the end of each half. In college football, there isn’t. If in college football somebody touches the ground with anything else then their hands or feet, the play is over.

Last but not least, when there is a tie in college football the game continues till there is a winner. Except from a playoff game, a tie in the NFL stays a tie.